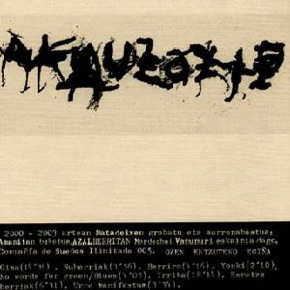 "... if we understand evolution as a way to make between respect for the heritage and memory, Akauzazte show us that have chosen the best way, perhaps the hardest, but the right one. Unashamed of debts on their teachers, and instinctively following the footsteps of nomadic paths crossed by them, Akauzazte been known to seek, find and shape their own personality. Dancing in the shadow of popular music, fornicating with rock, and looking fearlessly face to face, the avant-garde, Akauzazte invites us to know your personal world of sound. Between two edges: one real and raw, and a soft, imaginary, as the two skins of the snake. With new skin, but with the same head, Akauzazte." (Xabier Erkizia)